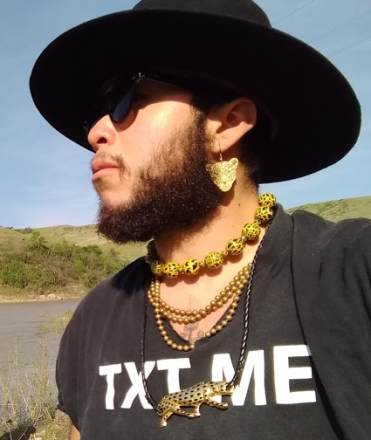 Migueltzinta Solís is an interdisciplinary artist and writer. He works in performance, video, installation, new media and textile. Migueltzinta writes essays, poetry, short and long fiction, often experimenting with forms of academic knowledge dissemination. Migueltzinta is a mestizXXX homosexual and FTM transexual. He was raised between southern Mexico and northern California. He has worked in a range of fields including sustainable agriculture, childcare, theatre technology and fine arts education. Migueltzinta holds an MFA in Art from the University of Lethbridge and a BA in Interdisciplinary Studies from The Evergreen State College. He is currently pursuing a PhD in Cultural, Social and Political Thought at The University of Lethbridge in Blackfoot territory.

Migueltzinta’s interests include perversity as strategy for institutional intervention and critique, autotheoretical methodologies in queer and postcolonial studies, questions of (un)belonging to place and land, the potential for and limitations of post-Mexican futurities (post-abuelita studies), and the pleasures and politics of amateur pornography production, app-driven and virtual hookup cultures. His work also investigates landscape/person relationship as S/M, considering frontierism and the wild west as colonial imaginaries through critical analyses of themed immersive environments such as theme parks and dark rides.

Migueltzinta is currently working on a collection of personal/academic essays concerned with queer/gay/trans and mestizXXX embodiment, desire, power, violence, (un)mapping, affect, ritual and phenomenology. He is seeking representation for a novel, an institutional colonization drama which tracks the founding of a university on Mars. Publications include contributions to The Indiana Review, Catapult, Medium and ASAP/Journal. He is also a contributing writer in a forthcoming volume from Athabasca Press, Race and The City. His dissertation project revolves around the building of a virtual “postcolonial” theme park.

For further stalking find @cauhboi on: